The judges recognised that King Sheet Piling was ‘exceptional’ and ‘more than just innovative’ and that it ‘could revolutionise a practice largely unchanged for 120 years.’ They concluded that it ‘could truly make an impact on a global scale.’

The judges said KSP was a ‘genuine Innovation, challenging the status quo and delivering a faster, safer more sustainable solution’ 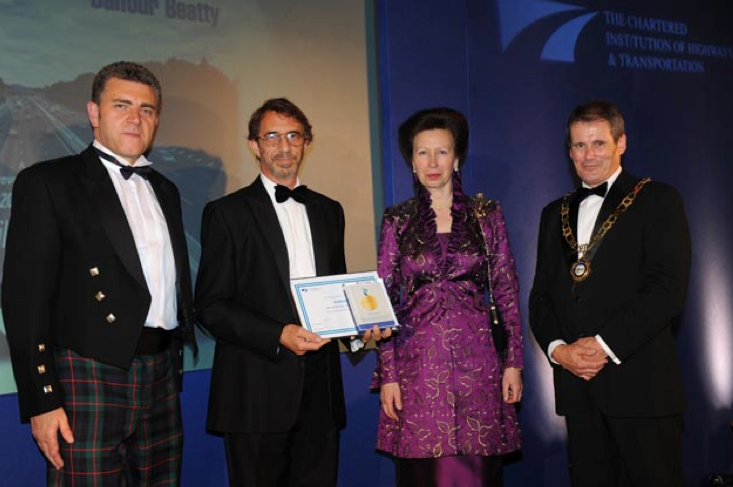 The Inventor, David Baker, accepting the 2012 Chartered Institution of Highways and Transportation Innovation Award from CIHT Patron, Her Royal Highness, The Princess Royal

The judges enthused over this innovative yet simple idea. Following value engineering, this design modification resulted in large cost savings and greatly increased productivity for this fast-track project. In addition, the reduction in materials used of 30 to 40% has resulted in economic, sustainable and environmental benefits. This novel construction technique significantly reduced the construction time and minimised disruption on a long section of the M25. Judges were also impressed by the communication and consultation between all parties involved which resulted in the use of an untried system on such a major project.

According to the judges, the use of King Sheet Pile (KSP) retaining walls on the M25”was a fantastically simple solution to a common problem, which will inevitably roll out across the industry.”

KSP was one of three finalists in Transport for London’s 2010 Supplier Innovation Competition (presented at TfL Innovation Seminar, 20 May 10)

To find out how you can use a KSP wall on your project, see Guidance to Users. Contact enquiries@ksp-piling.co.uk for more information.

July 2021: Installation of the last KSP wall on M4 Junctions 3 – 12 Smart Motorway marked completion of many kilometres of Smart Motorway KSP walls across the Highways England network. KSP walls are currently being designed for further schemes under the Smart Motorway Alliance programme.

2020 saw completion of substantial anchored and cantilever KSP walls for Langport Embankment for Network Rail, following on from those on Bridgewater rail embankment in 2019. KSP walls completed or in progress for Highways England include M23 J8-10, M1 J13-16, M4 J3-12, M25 EAs 01 & 06 and A19 Norton to Wynyard. Further KSP walls are envisaged on Highways England SMA schemes currently in the design phase.